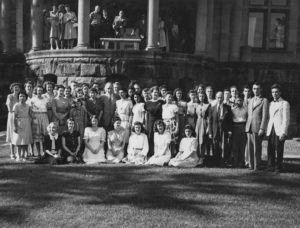 The American Conservatory was a direct outcome of the United States’ involvement with WWI. General Pershing wished to improve American military band music and, upon the advice of his friend the renowned conductor of the New York Philharmonic, Walter Damrosch, established a training school in Chaumont, the headquarters of the American Expeditionary Force. The school was run by composer, conductor and pedagogue Francis Casadesus and all the teachers were French. Fontainebleau was chosen not only for its magnificent location—the iconic  800 year-old residence of French kings brimming with architectural gems and surrounded by a renowned forest—but also for its relative proximity to Paris (60 km with easy access by train), accessible for cultural visits yet removed from the daily temptations of the famous city.

This program proved so successful that Damrosch and Casadesus decided, just after the war was over, to continue in a similar vein and create an American Conservatory to train American musicians taught by French professors. Having obtained the support of French officials, namely the sub-prefect of Fontainebleau, Maurice Fragnaud, and the composer and organist Charles-Marie Widor (who became its first director), the American Conservatory welcomed its first students in 1921 in the Louis XV wing of the Château of Fontainebleau. Since 1921, it has  uninterruptedly maintained its mission of training promising young musicians, throughout the summer months,  guided by the best faculty France had to offer; even during WWII, when Robert and Gaby Casadesus, in exile in the US, took over the summer program from 1940 to 1945 where it continued until their return to Fontainebleau in 1946.

From 1994 to 2013, renowned pianist and conductor Philippe Entremont was at the helm; he initiated a change in the statutes to allow not only American students but also students worldwide, particularly from Eastern Europe and Asia, to be introduced to the best music- making in France while absorbing French culture on the site of the magnificent Chateau. Composition, theory, piano, strings and chamber music form the core of the music program as well as a collaboration with young architects. Opportunities to come in contact with the most diverse cultures while seeking to excel in performance offer students today a unique experience.