Discover the life of Robert Casadesus in a long or short biography, as well as a chronological approach (‘Timeline’).

3,000 concerts, a considerable discography, a catalogue of 69 works, films and numerous educational speeches are signs of a great creative richness that now makes him considered one of the greatest French musicians of the 20th century.

His double vocation of performer-composer gave him the rare privilege of being both the observer and the perpetuator of the principal French musical currents of the 20th century. Commenting on an interpretation of Le Gibet, Ravel would say of him: “You must be a composer yourself in order to understand the music of others so well.”

The USA, where a major portion of his career took place, paid him an exemplary tribute: in the firmament of those rare French stars recognized in America, his star shines in Hollywood, alongside those of Rubinstein and Horowitz.

In audio and video, listen to Robert Casadesus recount his memories during radio interviews or view sequences shot during his lifetime.

Many writings have illustrated the life of Robert Casadesus. The bibliography and filmography menus allow you to access lists of works and video documents dedicated to the artist, while Programs is a collection of period programs.

A visit to ‘Exhibition‘ will enable you to appreciate the artist’s familiar objects, whereas the Documents section brings together numerous writings (newspaper articles, contemporary programmes, books), as well as audio and video excerpts.

You can also directly access the chronological and family albums in the photo galleries.

The Dana Piano Trio – violinist Wendy Case, cellist Kivie Cahn-Lipman, and pianist Cicilia Yudha – performed Robert Casadesus’ Trio  No. 1, opus 6 (1924), at the McDonough Museum of Art and the Dana School of Music (OH) on March 1, 2022, as part of the Muse series.

Cicilia, a pianist who attended the American Conservatory at Fontainebleau in 2005 and a scholar who wrote her Ph.D dissertation on Robert Casadesus, decided to feature this youthful work by the famous pianist and composer, as an homage commemorating the 50th anniversary of his passing. 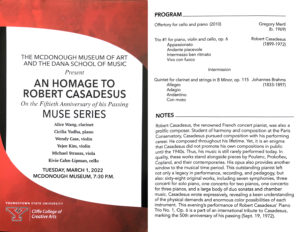 Many thanks to Lionel Esparza and Radio France for this lovely broadcast on the program Relax ! 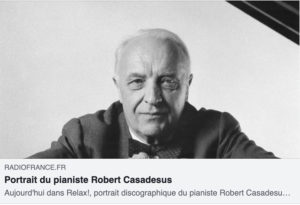 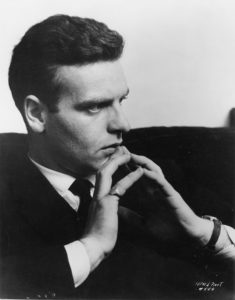 This week we commemorate Jean Casadesus on the 50th anniversary of his untimely passing on January 20, 1972. In addition to being the son of Robert and Gaby Casadesus, he was an accomplished classical pianist in his own right. Born in Paris, he studied primarily with his parents and made his debut with the Philadelphia Orchestra conducted by Eugene Ormandy in 1947. He thereafter enjoyed success as a concert pianist and also as a piano teacher, principally at the American Conservatory at Fontainebleau where one of his notable students was Robert D. Levin. He also taught at SUNY Binghamton for several years. He recorded solo piano works of Emmanuel Chabrier as well as French Baroque harpsichordists, notably François Couperin.

Jean and his parents were dubbed “The First Family of the Piano” for the 1967 Bell Telephone Hour television documentary in which they performed Bach and Mozart’s concertos for 3 pianos. They recorded these works with the Columbia Symphony and Cleveland Orchestra conducted by George Szell and with the Philadelphia Orchestra under the baton of Eugene Ormandy. In 1965, at Lincoln Center in New York, he premiered with them Robert Casadesus’ concerto for 3 pianos, which was recorded in 1966 and is available on the Sony Classical box set 1907583652. 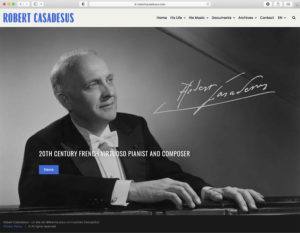 On the 50th anniversary of his passing in 1972, we are very proud to launch the redesign of the Robert Casadesus site. Here you will find everything from the old site with even more details in the texts and higher resolution photos. We have a program in 2022 to commemorate his life that we’ll be announcing soon, and this relaunch is the first part of it. Please come back for further announcements and feel free to send us your comments and questions. Welcome!

– The family of Robert Casadesus. 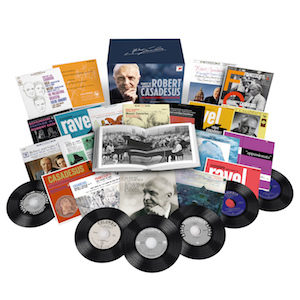 The complete collection of Columbia albums recorded between 1940 et 1969.
A 65 CD box set including many remastered recordings, most of which have never been released on CD.

Music Review by David Mermelstein from the April 9, 2019 edition of the Wall Street Journal :

Casadesus : Hard to Say, Easy to Listen To

A 65-CD tribute to the now-obscure French pianist Robert Casadesus highlights his broad classical repertory and reveals why he was so popular during his life.